Message from the Director “Creating a Space for Thoughts

At the time of the Battle of Okinawa, my family had evacuated to Kumamoto, where I was born. As I grew up, my parents told me countless stories of how wonderful our hometown Okinawa was. It was in 1954, when I was in the second grade of elementary school, that I first set foot on my cherished homeland that I had heard and dreamt so much about. It was less than a decade since the war, and what I saw in its aftermath was an island of rugged limestone, whitened with scars from 200 thousand tons of artillery that fell on the island, and stripped naked of everything that stood on the ground. US military vehicles roared by on the local roads, leaving trails of dust and smoke as the people waiting for their bus on the side of the street hid behind utility poles, seeking refuge from the scorching rays of the sun. Arriving from Kumamoto, where the land was covered in lush greenery, this sight truly shocked me and left me thinking how Okinawa desperately needed “shades of trees.”

Our ancestral land was requisitioned by the US Forces for its military base, and with the ground rent, I began collection works by Makoto Ueno, Käthe Kollwitz, Georges Rouault, and others. In 1983, I met artists Iri Maruki and his wife, Toshi Maruki, which was a fateful event for me. The couple was hoping to find a place in Okinawa for their work, Okinawa-sen no Zu (“The Battle of Okinawa”). Waves of change came rapidly in postwar Okinawa and the prefecture continued to get tossed around in the turmoil of the times. This only strengthened my desire to create “a space for thoughts” in Okinawa, a place where people could calm their souls and placidly let themselves become deeply absorbed in thought.
With our hopes and dreams aligned, and upon reclaiming a portion of our ancestral land, the Sakima Art Museum opened its doors on November 23, 1994.
The theme throughout the Museum’s collection is “people and war,” “life and death,” and “anguish and salvation”. The structural features of the Museum are based on and inspired by Okinawa, designed so that there is a sense of oneness with the Kamekobaka, the turtle-back tomb, in the garden (built circa 1740) where my ancestors are laid to rest, and the square opening at the top of the flight of stairs leading to the roof designed to meet the sun setting in the horizon on June 23 (Okinawa Memorial Day).
It is my wish that this Museum will be the “shade of trees” for the hearts and souls of the visitors, and to offer “a place of thoughts” where people can spend their time deep in their thoughts. 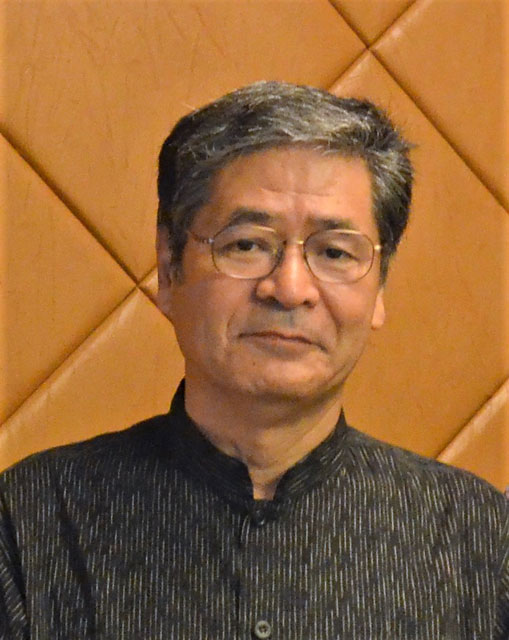